Earlier today, I received a phone call from a mobile number 0304-6511373, where some Syed Rizwan Gilani said he was calling from the Pakistan Army in regards to some discrepancy of census data and needed some verification.

This sounded unusual and he knew my full name on documents but I was willing to cooperate until he said the verification they need is my bank account information. I was alarmed at that moment and refused to give them any information.

He responded with an intimidating tone and said he hopes I’m not involved in any anti-Pakistan activities because as per his words ‘I was refusing to cooperate’.

In a few minutes, I received a call from the number 08000122. The same person was speaking and asked if I believed him now. I again responded in negative and said that anyone can get a 0800 toll free number to which he said in a louder tone that this was a 08000 number which he claimed is a ‘registered number of Pakistan Army’ – a claim I could not verify.

At this point I told him the name of the banks I have accounts in. His immediate question was my National Identity Card Number (CNIC) and the account number of the bank I receive my salary in. I refused to give him that information.

I asked him if he was indeed calling from the army, he would already have information like my CNIC number etc. To which, he again used some threatening and intimidating words. He said they have that information but they wanted to ‘verify’ which is why I needed to tell. He then used words like ‘thief’, ‘anti-Pakistan’ and ‘anti-Islam’ emphasising the need for such ‘verification’. I protested by telling him he was way out of line by using such words.

I even identified myself as a journalist working for the Daily Times, to which he said ‘I know’. He then warned me saying I’m refusing to ‘cooperate’ with the army. At this point, I told him all my financial transactions are through bank and everything is transparent and that I have nothing to hide.

I told him I wouldn’t allow anyone to question my patriotism over the phone like that using the name of the institution which is my institution too – whose soldiers are my soldiers and brothers too.

He warned me saying this was in regards to the ‘national security’. I told him if he could prove he was indeed from the army, I would have no issues in cooperating with the army over matters concerning national security.

The guy then put me on hold and after a few minutes, he asked if I would be comfortable giving this information to my bank for verification. I said okay. He then said I would be receiving a phone call from my bank in next 2 minutes and that I can give the needed information to them.

I indeed got a call from my bank Dubai Islamic Bank’s number 021-111-786-342 again in a few minutes and this time too, the same guy was speaking. It was spooky but I started to believe him a little. 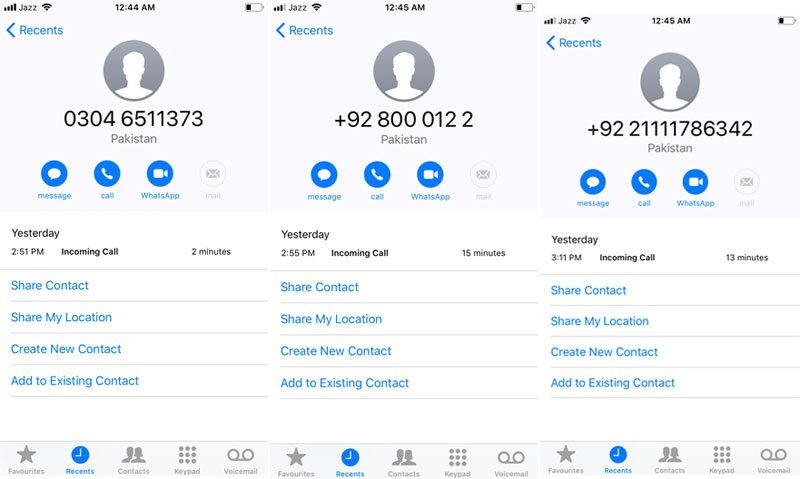 At this point, I had started to believe him a little and said I was willing to cooperate and ready to give whatever information was needed. He started by asking my CNIC number. I was curious as to why wouldn’t my bank already have that information even after getting it biometric-verified over a year ago but was also intimated so I told him my CNIC number.

He then asked my debit card number. Call me stupid or whatever but under intimidation I gave him that number as well. He then proceeded and asked for security information needed to access my bank account such as my mother’s maiden name, username and password of my internet banking account etc. I was alarmed again and refused to give any more information.

After again being told how I was being non-cooperative, I said I will go to the Pakistan Army with this information myself and will check if they called from the said numbers. I threatened him and said this seems like a cyber/telecom fraud to me and that they were the ones who sounded like terrorists with all the threats and intimidation. At this point, he hung up and didn’t call again.

What was common in all three calls was intimidation and use of sentences like ‘treason’, ‘anti-Pakistan’, ‘anti-Islam’ and how I was ‘posing a threat’ by refusing to cooperate.

I was still spooked out and felt intimidated but never for a second believed this could indeed be the Pakistan Army. I mean working in media, I know certain elements in certain security institutions do abduct journalists and even bloggers they deem ‘anti-Pakistan’ but was still at disbelief. I still don’t believe this was the army or the intelligence agencies.

What I did next was immediately called Pakistan Army’s helpline number they advertised to report any suspicious activity. To my shock, nobody picked up the call. I then called FIA’s cybercrime helpline and they didn’t pick either, neither did other cyber harassment helplines setup by community organisations.

This, at best, seems like a massive new way to scam and steal people’s identity by using the Pakistan Army’s name. I know the phone-masking technologies and that this could be achieved using Voice over IP (VoIP) technology as well but this still is extremely dangerous. Nobody should have that kind of power to call people from the number of their choosing.

What was even more concerning was the dysfunctional helplines. What if someone wants to report an incident like this or worse?

I have every intention of pursuing this with the Federal Investigation Agency (FIA) to track down whoever was calling me and hope I can help in uncovering this mega scam that uses the name of Pakistan Army to intimidate, threaten and steal people’s identities and bank account information.

The writer is the Digital Editor, Daily Times and can be reached at me@farhanjanjua.com. He tweets @FarhanJanjua